April Member of the Month~Congrats to Star Engineeering

The Wells County Chamber of Commerce staff and ambassadors recognized Star Engineering and Machine Co., Inc., 1717 W Lancaster DR, Bluffton, on Friday, April 7 as the April Member of the Month.

Star Engineering and Machine Co. Inc., founded by Harry and Bob Steffen, has been a staple of the Bluffton community since 1965. The industry currently employs 31 at the facility.

“I started sweeping floors at 11 years old when the business was on Morgan Street,” said Keith Steffen who now oversees the daily operations of organization.

The business originally started on Morgan Street until their move in 1973 to 1205 Wayne Street. The business underwent a series of expansions at the Wayne Street location before moving to their current location in 2008.

In 1990, Star Engineering was sold to investment company U.S. Group in Detroit. “They have taken a ‘hands-off’ approach,” said Steffen. Since the acquisition, Star has grown by increasing sales and upgrading equipment at the Bluffton facility.

Star Engineering’s diverse range of job activities has enabled specialization in a variety of custom Computer Numerically Controlled (CNC) machining. “We use lathes and mills to produce precision parts for a number of industries,” according to Keith Steffen.

Star Engineering has assisted various organizations throughout Wells County. Campers participating in the Wells County Robotics summer camp have toured the facility, the company has purchased smoke alarms and flags for the community, and donated to the duck race.

“On behalf of our team here at Star Engineering, it is an honor to receive this award. I feel blessed to be part of this community,” said Keith Steffen. 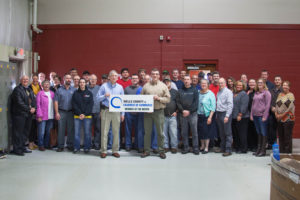