Archbold & Lewis is Recognized as November Member of the Month

Archbold & Lewis is Recognized as November Member of the Month

The Wells County Chamber of Commerce staff and Ambassadors honored Mike Lewis, owner of Archbold & Lewis Insurance, as the November Member of the Month. Archbold & Lewis has a location at 105 South Jefferson Street in Ossian and at 206 North Main Street in Bluffton.

In 1936, Pete Archbold started the company, then named WW Archbold & Associates. Archbold obtained a contract with Ohio Causality Insurance carrier (known today as Safeco Liberty Mutual), who they still use to this day. Archbold sold insurance for 40 years before Autie Lewis joined the company in 1975 and the name was changed to Archbold & Lewis Insurance.

Archbold and Lewis both worked out of their homes selling insurance in Ossian, which was very common during that time. Archbold eventually retired and Lewis bought the company. Autie’s son, Mike, obtained his insurance license in 1997 and worked with his father until the end of the year. “Dad officially retired January 1, 1998, and I had just built a home with an office to run the business,” said Mike. “We did not have a storefront until 2012 in downtown Ossian.”

After taking over the business, Mike had plans for growth. “I was fortunate that my wife was able to stay home with our two kids and I was able to be home working,” explained Mike. “Once the kids got into school, my plan was to bring the office to Ossian. I owned the building that Archbold & Lewis Insurance resides in now and moved the business to that location in 2012.”

Mike hired his first employee in 2010, Bill Dowty, who retired this year. Joe Lewis was hired in 2016 working to build his book of business; however, he also works full time at the National Guard. “Once Joe retires from the Guard, he will be able to step into the position full time,” explained Mike.

“After moving into the Ossian location, I had a five-year plan to open another location somewhere else,” said Mike. “It took six years until we found the Bluffton location in 2017. We continued to grow adding Alyssa Sponseller to the team in 2018 and now works primarily in Bluffton. Christina King has been with us for two and a half years as a full-time agent in Ossian. Amber McNally was just hired and is now a licensed agent working to assist Alyssa and Joe while writing her own business.”

Mike stated that the future goals of the company is to concentrate on growing within the community and hiring additional agents. “The next hire will be in Ossian and everybody on the team seems to be growing in the right direction. My goal is to coach our agents to brand themselves to grow professionally. Once that takes place, it does not matter if they work for me or for someone else, I am on their side no matter what. Should they choose to take that knowledge and go somewhere else, I am all for that because I want people to be the best you, you can be.”

Archbold & Lewis Insurance specializes in personal lines of insurance such as auto, home, life, property, motorcycle, boat, and golf carts. There are over 17 different companies Archbold & Lewis writes with giving customers options and offering prices to save money. “The number one thing we want to do here is to be an advisor to people,” stated Mike. “Maybe we are the best choice and maybe we are not, but it’s important to give everyone options and not assume we know what is best for the customer. We guide them with our education, what we have learned, and give options for them to choose what is best for them.”

“I could not imagine living anywhere else and I love my community,” said Mike. “I like people and I like talking to people a lot and that is where my heart lies. I have geared my office towards working with people personally versus larger businesses with little connection. In my heart, I enjoy helping people in whatever capacity that may be.” 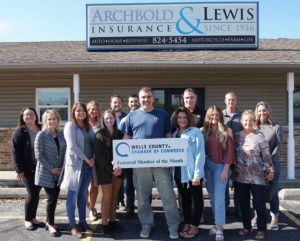