Barkley Builders Recognized as the August Member of the Month

The Wells County Chamber of Commerce staff and Ambassadors congratulated Barkley Builders, located in Ossian, on August 4 as the August Member of the Month. Randy Barkley learned the construction trade from his uncle in Decatur right out of High School. In the early 1980’s Barkley started his own business remodeling homes and constructing room additions. The first house Barkley ever built was for Ben Jones in 1984. During that time Barkley continued to focus on new home construction. New construction continued to be steady, building an average of 10 homes a year from 1989-2009. When the economy plummeted in 2009, one house was built all year; however, home remodels kept the business afloat and the focus switched to commercial construction. Randy’s son, Josh, started working for his father in 1999 and later purchased the business in 2012. Commercial property continued to be a strong focus for Barkley Builders. “We are proud to have completed the First Bank of Berne addition in Berne, have built 75 apartments since 2012, built the Huntington Township Fire Station and the Markle Library,” states Josh Barkley. “We want the design and build process to be all about the client and their needs. Custom built forever new homes is our motto,” says Josh Barkley. Since the 1980’s the Barkley team has constructed 300 new builds. Many of the homes that Randy Barkley built are now coming full circle with Josh remodeling or adding on to the existing homes. “People that dad built homes 25 years ago for are calling for remodels or we are building new homes for them. I am so thankful he started this business and that we are here in Wells County,” concludes Josh Barkley. 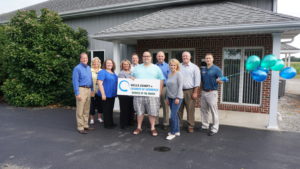