Felger Hart Honored as August Member of the Month

Felger Hart Honored as August Member of the Month

The Wells County Chamber of Commerce staff and Ambassadors surprised Felger Hart as the August Member of the Month on August 3, 2021. Felger Hart is located at 5049 North State Road 1 between Bluffton and Ossian.

Felger Hart was established when Jim Felger and Doug Hart started the business in 1983. The two gentlemen were known as the best technicians in Fort Wayne. Clients continuously suggested they start their own business; therefore, they both decided to take on the challenge.

The business was opened on Doug and Barb Felger’s property in Bluffton. The office was in the basement with Barb keeping the books for many years. Not long after the business opened, Felger’s son PJ started working at the company as a high schooler. Soon after, Felger’s second son, Tom, followed the same path. A family-run business was being formed.

In 2008 Tom and PJ bought the company and had a vision for growing the business and adding more employees. “As the company started to grow, space was becoming an issue on the property,” said Tom. “We were having a hard time getting the trucks in and out of the space we had and needed more room.”

The current location on State Road 1 became available in November 2014 and the brothers, PJ and Tom, purchased the building. “We moved everything over to this location and the building has been a great sales tool being off State Road 1. So many people drive by and are curious of what this business is, and they look us up,” stated Tom.

Tom takes pride in the 22 employees at Felger Hart creating a good work environment. “The longevity of the employees speaks volumes about the culture of the company,” explained Tom. “Many of them have been with us for a very long time and our goal is to always promote within. We like to hire young people and train them from the beginning and treat them well, so they want to stay with our business.”

PJ and Tom both have sons that recently graduated from High School and will be working at Felger Hart. “We are really excited to bring them in and have three generations a part of the business,” said Tom.

Felger Hart offers services specifically for the Commercial/Industrial HVACR with heating, air-conditioning, and refrigeration. “We are very strong on the comprehensive service side of the business because that is what my dad started in the beginning,” explained Tom. “PJ and I have grown the business installation and design-build projects.”

Tom explained that Felger Hart’s business model is to build relationships with customers, take care of any issues they may have, and treat them with the highest level of professionalism. “We work with businesses from small to large and it’s important they get to know us, call us if there is a problem, and know we will take care of them. We hope then that we are the first ones thought of when they want to replace a rooftop unit or install a new air conditioning unit.”

“It’s really important to us to maximize the strength of the team that we have because well trained technicians, that are good at what they do, are hard to find,” stated Tom. “We want to make the most impact on the technicians we have for what they are trained to do, and residential jobs are not the best use of their skill set.”

Felger Hart has a large training room in the facility and continuous learning and growing in the HVACR industry is a priority. Every week Bryce Arnold, Field Supervisor, is charged with leading a training topic to enhance the skillset of the staff. “We start the morning having breakfast together and then Bryce leads us in a training on a certain topic that will benefit everyone,” said Tom. “The topic could be a common issue we ran into recently on a jobsite or a particular problem area. It is all very hands-on learning. Bryce is extremely gifted and talented leading and training the sessions.”

Tom stressed how important Felger Hart’s values are and creating a culture where people are treated like they would want to be treated. “My dad and his partner established those values early on as technicians, displaying honesty and integrity, which makes a difference to build trust and relationships with businesses and people in the community. We will continue to grow as the Lord allows and grow as big as He allows. Our values and our culture set us apart.” 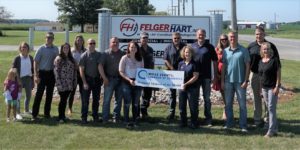