The Wells County Chamber of Commerce staff and Ambassadors welcomed Fields of Grace Floral Boutique to their new location at 207 West Market Street in Bluffton. A ribbon cutting was held on April 8, 2022, with owner, Bobbi Shane, to celebrate the larger space to accommodate her growing business.

Nathan Stauffer and his family started transforming the building in October 2021, which was formally Joyce’s Antiques, to accommodate the needs of Fields of Grace Floral Boutique. Stauffer said when remodeling the downtown buildings, which are 100-year-old structures, their intent is to maintain what is already there. “There are imperfections on the wall. It is not going to be perfect because we want the building to be as close as the original,” explained Stauffer. “We did a lot of work to expose the beautiful wood flooring, which were layers upon layers to be removed. The ceiling is the original stamped ceiling.”

Stauffer’s also added a bathroom, revamped the electrical, added new HVAC, and opened up the back of the building for additional workspace and storage for Shane.

Shane didn’t have any intentions of moving until last September when they were getting ready for their three-year anniversary. “My husband was hanging product on the wall and told me I needed more space,” said Shane. “I said I didn’t want to hear about it and didn’t have a desire to move. We had 75 people in the space for an event after that conversation and the confined area confirmed 100% that we needed more room.”

Shane was approached to move from a 1,200 square foot space to 3,000 and everything became a reality. “It was so stressful, and I am thankful I have a very patient husband,” said Shane. “God had other plans. Here we are and I love it.”

“I knew I wanted to eventually expand the business because I wanted to add more items to the store and there was no way to do that in the little space we had,” explained Shane. “We are now at a place to add offerings such as a very well-known line, Mud Pie, which offers faith-based items; a new service called Script n Scriptures by Fields of Grace which offers personalized signs and gifts made in-house with a new machine we just acquired; and an expanded children and baby area.”

Shane said that her employee, Sara Steele, loves to read and had a vision for a book nook area so people could come and read their Bible, devotions, or other materials. “We are now selling Bibles and devotions because there aren’t many places in town that people can buy these materials and customers were asking for them. Customers are welcome to bring their coffee, sit and read in peace.”

With growth, Shane realized new changes needed to be made in adding employees to the staff. “I am looking forward to taking off the many hats I was wearing. I am excited to announced that we hired an actual Floral Designer, Deb Perry, and she is fantastic. Flowers are in the cooler ready to go in the morning and that is such a great feeling. There are not enough hours in the day to be a business owner, wife, and a mother; I came to realization I needed to give up some of that control.”

Shane also hired Alyssa Toland and Jeanie Sirk to help with the day-to-day sales and operations. “With this larger space, there is more capacity and ability to give additional responsibility to our staff and it will be a relief,” said Shane.

“Even though we are in a new space, I still want people to get that warm, inviting, and comforting feel when they come into our store,” stated Shane. “There are times people come in to just get comfort and peace. We want people to feel God when they walk in those doors and even more. I love that people can find peace here and feel comfortable.”

Steele commented, “a customer pointed out to us recently that half the time we have been opened has been during a pandemic. We thank the community for the continued support, otherwise we, as well as other businesses, would not be here. We were so blessed to have a community that supported our local businesses during that time because they focused on shopping local. Everyone pulled together to support one other. Bluffton, as an entire community, has done a great job trying to get people involved.” 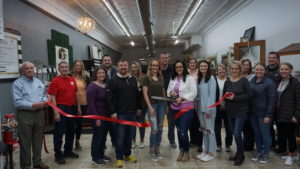