The Wells County Chamber of Commerce staff, Ambassadors, and Bluffton NOW! officially welcomed Parlor City Trophy, owners Chris and Georgie Corle, and their staff to their new location at 125 N Main St in Bluffton with a Ribbon Cutting on November 7.

Parlor City Trophy opened their business in 2005 in a small garage in Bluffton. Later in 2005, the business moved to a 900 square foot building on Johnson Street before moving again in 2011 to 224 West Market Street with 1,600 square feet.

“Our business has continued to grow with orders increasing and our customer base expanding,” explained Georgie Corle. “We purchased two new embroidery machines and hired two new employees in the last year.  Parlor City Trophy was running out of space.”

This past May, Corle started to look for a new location. “Everything happened so quickly from that point. Our realtor, Nick Huffman, worked very hard to keep us in the downtown area, which is where we wanted to stay,” said Corle.

“The pieces started to fall into place when Fields of Grace saw our building and it was perfect for what they needed,” said Corle. With the help of Huffman, the Corle’s found the perfect location at the old Stoller Dental building, which is 6,400 square feet. “This space and the layout are perfect for our business.”

Corle explained a lot of work was needed to be done before they moved the business within six weeks. “We had to put a lot of sweat equity into the space to get it ready in the timeframe we needed and keep the business open.”  Chris, Georgie, and a team of family and friends removed carpet and glue, moved the kitchen to the back of the building, removed short walls throughout the front, painted walls, re-wired areas and moved plumbing.

“After we removed drywall on the south side, we found a beautiful brick wall; however, it was covered with a sealant and sandblasting was not getting it removed,” Corle described. “After several attempts, power washing the wall removed the sealant. There was so much work to do, but it was worth it. The place is beautiful and perfect.”

Corle’s goal is 2019 is to take the siding off the front of the building in hopes to expose the brick underneath.

“We are thrilled to be in Bluffton and appreciate how Bluffton NOW! and the Chamber of Commerce have supported us; they are the reasons we wanted to stay in downtown,” said Corle.

“Increasing our staff size is also helping our business get more involved in the community. Our success is because our business is about the customer. The customer is the most important piece of our business and our team will do what we can to get the job done,” concludes Corle. 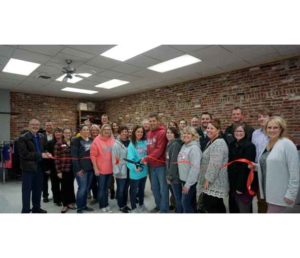