The Wells County Chamber of Commerce staff and Ambassadors surprised Georgie Corle, owner of Parlor City Trophy, as the March Member of the Month. Parlor City Trophy is located at 125 North Main Street in Bluffton.

Parlor City Trophy has been in business since 2005 and started in a garage. Corle wanted to own a business but wasn’t sure what she wanted to do until a friend gave her the opportunity to buy the business. “We ran Parlor City Trophy out of garage for three months and then moved to a place on Johnson Street,” explained Corle. “We rented that space for about two years and outgrew that location; therefore, we then moved to Market Street in 2012.”

Corle, and her husband Chris, renovated the upstairs and added an apartment through the Bluffton NOW! Community Reinvestment Program. The business continued to grow and in 2018, Parlor City Trophy moved to their current location on Main Street, which is 6,400 square feet of space with six employees.

“It’s been a whirlwind, and we could branch out into other areas, but we sure enjoy what we do,” said Corle. “Our goal is to keep up and keep moving forward. We have an upstairs and need to decide what to do with the space because there is a demand.”

Corle was born and raised in Wells County and can’t imagine being anywhere else. “Over the years I have seen such a difference in Wells County. It is exciting, as a business owner, to see everyone working together and the business growth that has taken place.”

“This honor makes us proud to see that people know we care,” stated Corle. “It’s not just about the business, it’s about the people. We support causes or benefits and if there is a need, our heartstrings are tugged to help where we can. When you have personally experienced a family member in that same position, you understand fully the impact it can make.”

“Georgie goes out of her way for people in need,” explained Chris Corle. “She will drop everything to help with a fundraiser or awareness and does this all the time. She is truly invested in this community and goes above and beyond to make it happen.”

“We just love people and making personal moments for each individual is important in our business,” Georgie Corle said. “We want to show people we really care.”

Parlor City Trophy offers services of embroidery, screen printing, engraving, trophies, awards, plaques, in addition to, an online and in-house clothing store. There is no minimum or maximum order on the services offered. Hours are Monday through Friday from 9am to 5pm. 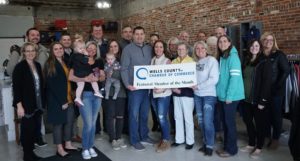