The Wells County Chamber of Commerce officially welcomed The Parlor City Brewing Company to Bluffton with a Ribbon Cutting on June 19, 2020. Owner, Chris Bryant, and the many supporters were excited to officially open the business after the long-awaited anticipation of a craft beer taproom in downtown Bluffton. The Parlor City Brewing Company is located at 212 West Market Street in Bluffton.

Although Bryant was born in Rochester, Indiana he has lived in Michigan since 1996. Coming back to Indiana to start a brewery has been a goal for several years. “It’s really difficult to start a brewery in Michigan because breweries are very saturated in the resort areas,” explained Bryant. “We looked at different places in Indiana and wanted to find a historic building where we could live upstairs and run the brewery in the downstairs.”

Bryant found the Market Street building on MLS and continued to do more research on Bluffton. “The realtors got me in touch with Economic Development and Bluffton NOW! and they explained about the grant opportunities available and what was being done to rehab downtown. The location is close to Fort Wayne and we want to make it a destination place for the surrounding counties. It was a perfect fit.”

A lot of work needed to be done to the building such as a new roof, removal of layers upon layers of flooring to expose the beautiful wood floor underneath, clean up the living space upstairs, demo the downstairs to open up the space and get ready for construction, paint the walls upstairs and downstairs, and prepare a workable space for the brewery.

Bryant’s passion of craft beer brewing started in 2007, but also has an extensive background as a chef. “I have worked at several resorts and businesses in Michigan as a chef most of my life. Within the last several years, I was able to gain experience working at a brewery and learned how to brew commercially,” said Bryant.

Bryant’s goal now is to make enough beer to keep up with the demand in Wells County. “We sold a lot of beer this past weekend. We started out with a small brewing system because it was affordable but wanted to show proof that there is a demand and we can grow from there.”

Currently, food is not offered; however, with Bryant’s background he will slowly start to add food before the end of the year offering small and simple items.  Bryant said customers are welcome to order food from local restaurant’s and have it delivered or bring food in.

The Parlor City Brewing Company currently offers 8 different craft beers. “Even if you are not familiar with craft beer or have not had a positive experience in the past, come in and give us a try,” Bryant stated. “There are a lot of different styles and our beer tenders are educated on the ingredients and can navigate you through the menu of options and find something you would enjoy.”

A few of the beers have a familiar taste and others are geared towards those that may enjoy the fruity cocktails. “Craft beer offers a variety of flavors and we encourage people to experiment with the styles,” said Bryant. “We will have a rotation of beers by the season but will keep 4-5 on tap at all times. We are experimenting right now what people want and like. We have the capacity to have 8 taps for the future.”

Bryant wants to thank the many individuals that have supported this endeavor since coming to Wells County. The partners that have helped to make the opening happen are: John Stauffer, Josh Perry, Nick Huffman, John Emshwiller, and Steve Stauffer.

The Parlor City Brewing Company hours are Thursday, Friday and Saturday from 4pm to 8pm and Sunday from 2pm to 8pm. 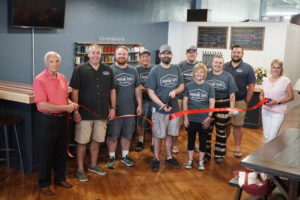