The Wells County Chamber of Commerce staff and Ambassadors congratulated Valero Renewable Fuels as the September Member of the Month. Valero is located at 1441 South Adams Street in Bluffton.

Valero purchased Green Plains in late 2018 and since invested significant capital into the facility to improve processes, safety, and liability. Justin Moen, Plant Manager, stated that with the improvements Valero also increased staff significantly. There is now just over 70 employees at Valero. “It was important to make a substantial investment in the company for improvements; however, we needed to get to the appropriate level of staffing.”

Valero has 12 plants in the Midwest and is the largest independent petroleum refinery in the world and the world’s second largest renewable diesel producer. Valero works directly with local farmers and co-ops contracting bushels of corn to the facility. “We want to have a relationship with local farmers,” said Moen. “We have programs in place to entice area farmers to do business with us. They need us and we need them. If we don’t have their bushels, we don’t have an end product. They are very important to the operations of our business.”

Moen explained that the facility needs approximately 200 trucks delivering corn a day to keep the facility in operation for production. “Once the ethanol is produced on site the product is then exported on railcars. The co-product from ethanol is sold back to local farmers and elevators to feed their livestock.”

Valero facilities are typically in rural communities; therefore, it is important for the company to be active members. “Our employees are our number one asset and if we can be involved in the community, it helps everyone. We have already reported over 800 volunteer hours this year and are expecting more. Involvement is a lot of fun for us.”

“We want Valero to be known in our community as an active business that gives back, provides to others, are hands-on, and supports monetarily to local organizations,” stated Moen. “We do business the right way and don’t waiver from those values. We don’t want to be known just as the ethanol plant. We pride ourselves on safety and being environmentally compliant.” 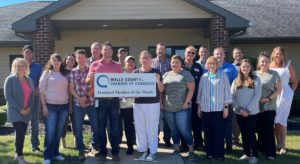