“Other seeds fell on good soil and produced grain, some a hundredfold, some sixty, some thirty,” — Matthew 13:8
The passage above from the Holy Bible is the ultimate mission of Youth for Christ, as explained by Chief Operations Officer Rhonda Beall for BIGJAWs.

“The name of our chapter is BIGJAWs because it’s in five counties,” said Beall. Those counties are Blackford, Grant, Jay, Adams and Wells.
“We are on our 30th-year anniversary this year. On Sept. 11, 1991, JAWs was created because at that time it was Jay Adams and Wells counties,” Beall said. In 2008, Blackford and Grant counties were added.
“As part of our 30th anniversary, we’ve added a 30th ministry site, which is India. We are partnering with YFC international and we have formed a partnership with India so we like to think the ‘I’ in BIG JAWs represents India,” Beall said.
The local chapter is sponsoring the chapter in India and hopes to build a mentorship, she said. The mentorship will go two ways.
“I’m sure there are things in India that they have learned that they can do that can help us and give us a different perspective on ministry,” Beall said.

BIGJAWs is in a new location — the corner of Market and Marion streets across from PNC Bank.
The JAWs chapter’s first office was in Berne. In the mid-90s, the location was moved to South Main Street in Bluffton across the street from Bluffton Regional Medical Center. The building has since been torn down.
Then in 1999, JAWs bought the building on North Main Street that is now occupied by Family Centered Services. “That was our home for several years,” Beall said.
Three years ago, BIGJAWs moved again by renting a space on the second floor in the former Franklin Electric building, now WEG.

“It was really nice, we liked it, but we needed a smaller space,” Beall said. “COVID has kind of taught us over the past couple of years we can do ministry more effectively at other places than sitting in an office,” she added.

“This became available and we love the location. It’s right here in the heart of the city. We’re more visible and we also are able to have some nice interactions with people in the community and the neighbors. People can stop by here. We’re more accessible here than we were on the second floor of WEG, Beall said.”
The move was completed in July.

Youth for Christ is open to youth ages 11 to 19. The organization works with the area schools to be where the youth are.
BIGJAWs works through 13 schools in the five counties. Locally they are in Southern Wells Jr./Sr. High School, both Bluffton middle and high school and in Norwell middle and high school.
The directors at the Wells County schools are Madi Moore at Bluffton, Allison Blevins at Southern Wells Ked Moser at Norwell High School and Garrett Bucher at Norwell Middle School. BIGJAWs executive director is Ryan Biegel. There is also a large group of volunteers who assist.

But BIGJAWs extends beyond schools.
“We go into coffee shops, we go into places where the youth are,” Beall said. “We want to build and form relationships with the youth. We build a strong relationship and a strong foundation with them. Kids today need a mentor. They need a positive role model, they need someone to listen to them,” she said.
The stated mission of BIGJAWs is “YFC reaches young people everywhere, working together with the local church and other like-minded partners to raise up lifelong followers of Jesus who lead by their godliness in lifestyle, devotion to prayer and the Word of God, passion for sharing the love of Christ and commitment to social involvement.”

Programs vary and are aimed at building up youth. Among the programs is Bible study, but youth are not required to attend.
“The main thing is to be in their community to be a positive role model, to be available to the youth to build relationships,” Beall said. “Sometimes we’re the bridge that helps those kids connect to other resources they may need as a kid,” she added.

Clubs are open to everyone in the school. They also offer small group studies. There are weekly breakfasts with speakers who address topics aimed at being relevant to the issues young audiences are dealing with. Other activities are offered that vary from school to school and from director to director. There are scavenger hunts, there’s something similar to the Amazing Race there are a lot of different activities, Beall stressed.

“The idea is once a student gets comfortable with Youth for Christ, builds relationships, builds a friendship with the director, then they introduce Christ to them,” Beall said. “Do you know about the Gospel? Do you know Jesus? Would you like to know more? Sometimes kids are very receptive to it and sometimes they’re not, but there’s no pressure or obligation. All are welcome to come to Youth for Christ events and be a part of the organization,” Beall said.

In many cases, though, youth do come forward and express an interest in wanting to know more about the Gospel and about having a personal relationship with Jesus Christ, Beall explained.

“Our directors spend time with them and put them in small groups, Bible studies, and they work with a church, get them plugged into that church and in touch with a youth pastor. We’re a bridge in between school and church,” Beall said.

Eventually the goal is that the students will become comfortable with their faith and be able to talk about it outside of their small group — scattering the faith like seed upon the ground as Jesus explained in the parable at the beginning of this story, Beall observed.

“It’s an exciting year to be able to celebrate 30 years in this community,” Beall said. “We’re thankful for the support of the community, the schools, our staff and out donor base. They’ve kept us strong and kept us still going.” 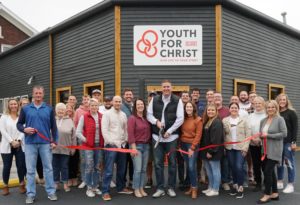